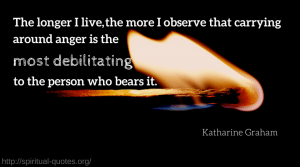 Anger is a hard emotion to fight, especially when it’s justified! But holding on to your anger hurts you more than it impacts anyone else. Here are some of the best quotes to help you let go of your anger and calm your mind.

Consider how much more you often suffer from your anger and grief, than from those very things for which you are angry and grieved.

Anger is the enemy of non-violence and pride is a monster that swallows it up.

There are three things all wise men fear: the sea in storm, a night with no moon, and the anger of a gentle man.

Speak the truth; do not yield to anger; give, if thou art asked for little; by these three steps thou wilt go near the gods.

The longer I live, the more I observe that carrying around anger is the most debilitating to the person who bears it.

The continuance and frequent fits of anger produce in the soul a propensity to be angry; which oftentimes ends in choler, bitterness, and moronity, when the mid becomes ulcerated, peevish, and querulous, and is wounded by the least occurrence.

Holding on to anger is like grasping a hot coal with the intent of throwing it at someone else; you are the one getting burned.

Every child senses, with all the horse sense that’s in him, that any parent is angry inside when children misbehave and they dread more the anger that is rarely or never expressed openly, wondering how awful it might be.

A man makes inferiors his superiors by heat; self-control is the rule.

When I am angry I can pray well and preach well.

Words can be said in bitterness and anger, and often there seems to be an element of truth in the nastiness. And words don’t go away, they just echo around.

It doesn’t pay to say too much when you are mad enough to choke. For the word that stings the deepest is the word that is never spoke, Let the other fellow wrangle till the storm has blown away, then he’ll do a heap of thinking about the things you didn’t say.

We are looking for happiness and running after it in such a way that creates anger, fear and discrimination. So when you attend a retreat, you have a chance to look at the deep roots of this pollution of the collective energy that is unwholesome.

When we can lay down our fear and anger and choose responses other than aggression, we create the conditions for bringing out the best in us humans.

Humor is almost always anger with its make-up on.