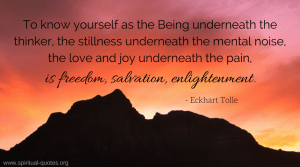 Enlightenment cannot be explained in just one definition. Spiritual enlightenment comes from unique and complex experiences, so it differs from person to person. To take enlightenment to the extreme you can explain it as being able to separate yourself from your personality or identity, thus leaving no trace of the egoistic mind. Enlightenment can also be described as the complete understanding of your purpose and meaning in life. Many argue that everyone is enlightened, but that it is oppressed by awake consciousness. Through meditation and discipline enlightenment can be reached in your conscious state.

Enlightenment goes hand-in-hand with energy and the connection of all types of energy. This can be interpreted as devotion to a higher power or a deeper understanding of creation and life. Energy and enlightenment contribute to unlocking your Chakra databanks. This means that enlightenment can only be reached when a joyous connection with the divine is made through your aura.

Enlightenment can also be termed as blissfulness. Buddhists believe that the first step to enlightenment is to let go of your fears and doubts to break limits. In doing this you will be more open or susceptible to experience your ever-expanding consciousness.

The best quotes on Enlightenment

To enjoy good health, to bring true happiness to one’s family, to bring peace to all, one must first discipline and control one’s own mind. If a man can control his mind he can find the way to Enlightenment, and all wisdom and virtue will naturally come to him.

And as long as you’re subject to birth and death, you’ll never attain enlightenment.

Religions have always stressed that compassion is not only central to religious life, it is the key to enlightenment and it the true test of spirituality. But there have always have been those who’d rather put easier goals, like doctrine conformity, in place.

“It isn’t by getting out of the world that we become enlightened, but by getting into the world…by getting so tuned in that we can ride the waves of our existence and never get tossed because we become the waves.”

“According to Vedanta, there are only two symptoms of enlightenment, just two indications that a transformation is taking place within you toward a higher consciousness. The first symptom is that you stop worrying. Things don’t bother you anymore. You become light-hearted and full of joy. The second symptom is that you encounter more and more meaningful coincidences in your life, more and more synchronicities. And this accelerates to the point where you actually experience the miraculous. (quoted by Carol Lynn Pearson in Consider the Butterfly)”

“I’m simply saying that there is a way to be sane. I’m saying that you can get rid of all this insanity created by the past in you. Just by being a simple witness of your thought processes.

It is simply sitting silently, witnessing the thoughts, passing before you. Just witnessing, not interfering not even judging, because the moment you judge you have lost the pure witness. The moment you say “this is good, this is bad,” you have already jumped onto the thought process.

It takes a little time to create a gap between the witness and the mind. Once the gap is there, you are in for a great surprise, that you are not the mind, that you are the witness, a watcher.

And this process of watching is the very alchemy of real religion. Because as you become more and more deeply rooted in witnessing, thoughts start disappearing. You are, but the mind is utterly empty.

That’s the moment of enlightenment. That is the moment that you become for the first time an unconditioned, sane, really free human being.”

“Enlightenment is man’s release from his self-incurred tutelage. Tutelage is man’s inability to make use of his understanding without direction from another. Self-incurred is this tutelage when its cause lies not in lack of reason but in lack of resolution and courage to use it without direction from another. Sapere aude! ‘Have courage to use your own reason!’- that is the motto of enlightenment.”

― Immanuel Kant, An Answer to the Question: What Is Enlightenment?

“In my own life I know that my state of cheerfulness is a reliable gauge of my level of spiritual enlightenment at that moment. The more cheerful, happy, contented, and satisfied I am feeling, the more aware I am of my deep connection to Spirit.”

To reach enlightenment varies from person to person. It cannot be forced and no formula will be the same for any individual. It may be reached through spiritual devotion, meditation, silencing of the mind or by surrendering your awake consciousness. When enlightened, you gain a new perception to life. A kaleidoscope of choices will be available to you. You will see the world through a new set of eyes. You trust in all that is created and feel merged with the energy around you. Enlightenment does alter your personality and may lead to a type of desired transcendence.