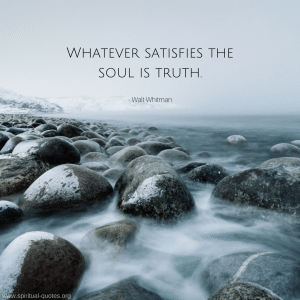 When you are finding it difficult to tell someone something that is truthful, look to these quotes from inspired minds to help you find the courage to do so.

I refuse to accept the view that mankind is so tragically bound to the starless midnight of racism and war that the bright daybreak of peace and brotherhood can never become a reality… I believe that unarmed truth and unconditional love will have the final word.

I’m selfish, impatient and a little insecure. I make mistakes, I am out of control and at times hard to handle. But if you can’t handle me at my worst, then you sure as hell don’t deserve me at my best.

There is no greatness where there is not simplicity, goodness, and truth.

God offers to every mind its choice between truth and repose. Take which you please — you can never have both.

There is no god higher than truth.

Truth is no Doctoresse, she takes no degrees at Paris or Oxford… but oftentimes to such an one as myself, an Idiota or common person, no great things, melancholizing in woods where waters are, quiet places by rivers, fountains, whereas the silly man expecting no such matter, thinketh only how best to delectate and refresh his mynde continually with Natura her pleasaunt scenes, woods, water-falls, or Art her statelie gardens, parks, terraces, Belvideres, on a sudden the goddesse herself Truth has appeared, with a shyning lyghte, and a sparklyng countenance, so as yee may not be able lightly to resist her.

Man is least himself when he talks in his own person. Give him a mask, and he will tell you the truth.

Whoever is careless with the truth in small matters cannot be trusted with important matters.

When I despair, I remember that all through history the way of truth and love have always won. There have been tyrants and murderers, and for a time, they can seem invincible, but in the end, they always fall. Think of it–always.

Find out who you are and be that person. That’s what your soul was put on this Earth to be. Find that truth, live that truth and everything else will come.

I have learned now that while those who speak about one’s miseries usually hurt, those who keep silence hurt more.

Whatever satisfies the soul is truth.

Truth is like the sun. You can shut it out for a time, but it ain’t goin’ away.

A man’s true character comes out when he’s drunk.

I have a theory that the truth is never told during the nine-to-five hours.