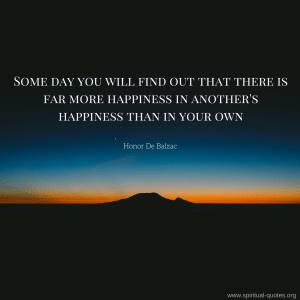 Only when we truly love someone or something do we realize how to make sacrifices. Sacrifice may seem like a simple word but it carries a much deeper meaning. It entails commitment and willingness to give up something or someone, either temporarily or permanently for something else.

A sacrifice could be as small as a mother foregoing the purchase of something she really likes at the store, such as a dress or a piece of jewelry to instead use the money to buy something for her daughter. Something as small as skipping a movie date with friends to spend time with your mother or father who came to town.

Or it could be as big as letting a loved one go when we realize he is in love with someone else. It could be as grand as giving up a well-deserved career to stay at home and focus on your kids, give them the time and attention they need to grow and develop in a loving and nurturing environment. Sacrifice means a lot – both to the one who is willing to sacrifice and to the one who is sacrificed for. It means that there is much love present, for one does not simply sacrifice for someone unimportant.

“The ultimate test of man’s conscience may be his willingness to sacrifice something today for future generations whose words of thanks will not be heard.”
― Gaylord Nelson

“Some day you will find out that there is far more happiness in another’s happiness than in your own.”
― Honor De Balzac

“I pledge allegiance to the Christian flag, and to the Savior, for whose Kingdom it stands, one Savior, crucified, risen, and coming again, with life and liberty for all who believe.”
― Dan Quayle

“Every step toward the goal of justice requires sacrifice, suffering, and struggle; the tireless exertions and passionate concern of dedicated individuals.”
― Martin Lt. King

He who never sacrificed a present to a future good or a personal to a general one can speak of happiness only as the blind do of colors.
― Olympia Brown

“Sometimes when you sacrifice something precious, you’re not really losing it. You’re just passing it on to someone else.”
― Mitch Albom

“Our god is the thing, or person, which we think most precious, for whom we would make the greatest sacrifice, and who moves our heart with the warmest love. He is the person or thing that if lost would leave us desolate.”
― Allan Redpath

“Of all the work that produces results, nine tenths must be drudgery. There is no work, from the highest to the lowest, which can be done well by any man who is unwilling to make that sacrifice.”
― Edward Henry Bickersteth

“A human being has many divine qualities. But there has never been another unparalleled divine quality like man’s self-sacrifice, nor can there ever be.”
― Sri Chinmoy

Anyone, at some point in their lives, has made a sacrifice for someone. Grand ones, small ones and even those which may seem insignificant, but still tug at the heartstrings of those involved. It is a part of life, which shows the ones we love that we are willing to take an extra step, walk an extra mile, to prove that they are important to us, that they are loved. Somehow, sacrifices make our lives richer and fuller. They let us know how strong we are and how much we are willing to give up freely for those we love.