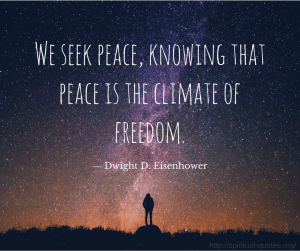 How can we create peace around us when we have no peace within? These quotes will help you find the path.

For every minute you remain angry, you give up sixty seconds of peace of mind.

When I say it’s you I like, I’m talking about that part of you that knows that life is far more than anything you can ever see or hear or touch. That deep part of you that allows you to stand for those things without which humankind cannot survive. Love that conquers hate, peace that rises triumphant over war, and justice that proves more powerful than greed.

There is one armor that the world of men and women, as a world, has never yet put on. The churches have long bungled with its fastenings, but the world has gone unfended, and few have been those in whose hands the mystical sword of the spirit has shone with daily use. This armor, waiting to be worn, is the armor of brotherhood and sacrifice, the world of unselfishness, a conquering sword, with the power, where used, to unite the world in love. And there are none who may not put it on.

One of the greatest dangers to peace lies in the economic pressure to which people find themselves subjected. One of the most practical things to be done in the world is to seek arrangements under which such pressure may be removed, so that opportunity may be renewed and hope may be revived.

Better than a thousand useless words is one word that gives peace.

Peace is not absence of conflict, it is the ability to handle conflict by peaceful means.

Dogs are our link to paradise. They don’t know evil or jealousy or discontent. To sit with a dog on a hillside on a glorious afternoon is to be back in Eden, where doing nothing was not boring–it was peace.

Than battle ever knew.

In the days of peace every precaution should be taken to insure that there are no forces making for war. Just as we now forbid the trafficking in certain drugs, in the sale of poisons, just as we forbid the making of any imprint that suggests a coin or currency, just as experience has demonstrated that men may not make profit out of certain things because of the danger of abuse, so in the gravest of all dangers laws should be passed taking from those who might gain from war or preparations for war every hope that advantage could come to them by such a calamity.

Five great enemies to peace inhabit with us: avarice, ambition, envy, anger, and pride. If those enemies were to be banished, we should infallibly enjoy perpetual peace.

Gratitude makes sense of our past, brings peace for today, and creates a vision for tomorrow.

We seek peace, knowing that peace is the climate of freedom.