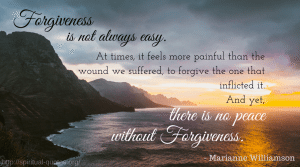 When people hurt us it can be difficult to move on from that. Even when they are sorry or it was unintentional, how can we let go of the bad feelings we had as a result? It helps if we turn to inspirational quotes for guidance in dealing with these situations.

The weak can never forgive. Forgiveness is the attribute of the strong.

Always forgive your enemies; nothing annoys them so much.

Whoever approaches Me walking, I will come to him running; and he who meets Me with sins equivalent to the whole world, I will greet him with forgiveness equal to it.

The heart of a mother is a deep abyss at the bottom of which you will always find forgiveness.

The best thing to give to your enemy is forgiveness; to an opponent, tolerance; to a friend, your heart; to your child, a good example; to a father, deference; to your mother, conduct that will make her proud of you; to yourself, respect; to all men, charity.

Forgiveness is not always easy. At times, it feels more painful than the wound we suffered, to forgive the one that inflicted it. And yet, there is no peace without forgiveness.

I can forgive, but I cannot forget, is only another way of saying, I will not forgive. Forgiveness ought to be like a canceled note — torn in two, and burned up, so that it never can be shown against one.

Confront the dark parts of yourself, and work to banish them with illumination and forgiveness. Your willingness to wrestle with your demons will cause your angels to sing.

Forgiveness says you are given another chance to make a new beginning.

I could easily forgive his pride, if he had not mortified mine.

Here is the amazing thing about Easter; the Resurrection Sunday for Christians is this, that Christ in the dying moments on the cross gives us the greatest illustration of forgiveness possible.

My heart was heavy, for its trust had been

So, turning gloomily from my fellow-men,

One summer Sabbath day I strolled among

The green mounds of the village burial-place;

Where, pondering how all human love and hate

Find one sad level; and how, soon or late,

Wronged and wrongdoer, each with meekened face,

And cold hands folded over a still heart,

Pass the green threshold of our common grave,

Whither all footsteps tend, whence none depart,

Awed for myself, and pitying my race,

Swept all my pride away, and trembling I forgave!

Forgive me my nonsense, as I also forgive the nonsense of those that think they talk sense.