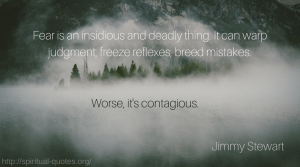 Fear can creep up on us when we least expect it. Here are some quotes to support you in times of fear, and help you find courage when you need it most.

Fear can be good when you’re walking past an alley at night or when you need to check the locks on your doors before you go to bed, but it’s not good when you have a goal and you’re fearful of obstacles. We often get trapped by our fears, but anyone who has had success has failed before.

The only thing we have to fear is fear itself–nameless, unreasoning, unjustified terror which paralyzes needed efforts to convert retreat into advance.

Nothing in life is to be feared.  It is only to be understood.

We should all start to live before we get too old. Fear is stupid. So are regrets.

Battle is the most magnificent competition in which a human being can indulge. It brings out all that is best; it removes all that is base. All men are afraid in battle. The coward is the one who lets his fear overcome his sense of duty. Duty is the essence of manhood.

Fear defeats more people than any other one thing in the world.

I was as afraid as the next man in my time and maybe more so. But with the years, fear had come to be regarded as a form of stupidity to be classed with overdrafts, acquiring a venereal disease or eating candies. Fear is a child’s vice and while I loved to feel it approach, as one does with any vice, it was not for grown men and the only thing to be afraid of was the presence of true and imminent danger in a form that you should be aware of and not be a fool if you were responsible for others.

Fear can be headier than whiskey, once man has acquired a taste for it.

Tell your heart that the fear of suffering is worse than the suffering itself. And that no heart has ever suffered when it goes in search of its dreams, because every second of the search is a second’s encounter with God and with eternity.

Fear of something is at the root of hate for others, and hate within will eventually destroy the hater.

The cave you fear to enter holds the treasure you seek.

I have learned over the years that when one’s mind is made up, this diminishes fear; knowing what must be done does away with fear.

Courage is resistance to fear, mastery of fear – not absence of fear.

Fear is a slinking cat I find beneath the lilacs of my mind.

To fear love is to fear life, and those who fear life are already 3-parts dead.