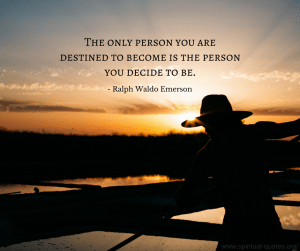 What is your destiny? These quotes may help you find it.

Bottom line: God will not allow any person to keep you from your destiny. They may be bigger, stronger, or more powerful, but God knows how to shift things around and get you to where you’re supposed to be.

The only person you are destined to become is the person you decide to be.

The paradoxical nature of any revolt against destiny becomes clear when a person asks what his life would have been like if someone other than his actual father had begotten him; he forgets, of course, that in that case he would not have been “himself,” that the person undergoing this different destiny would have been someone else entirely so that it would no longer be possible to speak of “his” destiny. The question of the possibility of a different destiny is therefore untenable in itself, self-contradictory and meaningless.

The best years of your life are the ones in which you decide your problems are your own. You do not blame them on your mother, the ecology, or the president. You realize that you control your own destiny.

It is better to live your own destiny imperfectly than to live an imitation of somebody else’s life with perfection.

Not without a shudder may the human hand reach into the mysterious urn of destiny.

You are the master of your own destiny. Use your strengths well. They are the keys to your destiny and your success in life. Once you know yourself and take action to realize your dreams, you can unlock the doors to your own potential.

We live in an era of globalization and the era of the woman. Never in the history of the world have women been more in control of their destiny.

It just has to be. In time. In place. In spirit.

It just has to be.

There is a Destiny which has the control of our actions, not to be resisted by the strongest efforts of Human Nature.

Your destiny is to fulfill those things upon which you focus most intently. So choose to keep your focus on that which is truly magnificent, beautiful, uplifting and joyful. Your life is always moving toward something.

Destiny is what you are supposed to do in life. Fate is what kicks you in the ass to make you do it.