Notice: Trying to get property 'session_id' of non-object in /home/spiritual-quotesorg-1039/public_html/prod/wp-content/plugins/ninja-forms-legacy/deprecated/classes/session.php on line 122

Notice: Trying to get property 'session_id' of non-object in /home/spiritual-quotesorg-1039/public_html/prod/wp-content/plugins/ninja-forms-legacy/deprecated/classes/session.php on line 123 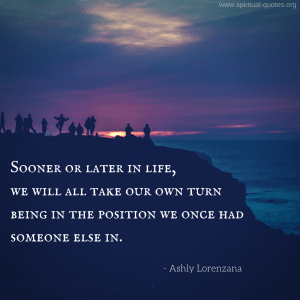 Karma is a widely known concept but seldom understood. The concept originates out of ancient India and is an essential part of the Buddhist, Hindu, Jain, Sikh and Tao religions. Literally meaning action, work and deed, karma is the concept of cause and effect. The cause is a person’s intent and actions while the effect is the influence these actions will have on the person’s future.

The idea of karma explains that good deeds and intentions will lead to good karma, and ultimately a positive and happy future. Oppositely, bad intentions and deeds will result in bad karma and eventually suffer in the future.

Karma is also closely linked to the concept of rebirth among many of the Eastern religious beliefs. These beliefs understand that good karma will result in happiness in not only your future life but any other lives to come after experiencing a rebirth into a new life.

The concept of karma influences moral conduct and demonstrates that with action comes consequence and one will always be reciprocated with what they deserve. Karma is used to explain inequality amongst individuals in society and attributes our current circumstance to our past actions, whether from this life or a previous one.

The most famous quotes on Karma

“I believe that the Laws of Karma do not apply to show business, where good things happen to bad people on a fairly regular basis.”
― Chuck Lorre

“I try to live with the idea that karma is a very real thing. So I put out what I want to get back.”
― Megan Fox

“As long as karma exists, the world changes. There will always be karma to be taken care of.”
― Nina Hagen

“Everyone gets dumped and everyone gets hurt and there’s karma to love in regards to what you’ve done to other people.”
― Marina and the Diamonds

“I’m a very firm believer in karma, and put it this way: I get a lot of good parking spots.”
― Al Jourgensen

“Karma comes after everyone eventually. You can’t get away with screwing people over your whole life, I don’t care who you are. What goes around comes around. That’s how it works. Sooner or later the universe will serve you the revenge that you deserve.”
― Jessica Brody

“Even if things don’t unfold the way you expected, don’t be disheartened or give up. One who continues to advance will win in the end.”
― Daisaku Ikeda

“Even chance meetings are the result of karma… Things in life are fated by our previous lives. That even in the smallest events there’s no such thing as coincidence.”
― Haruki Murakami

“Sooner or later in life, we will all take our own turn being in the position we once had someone else in.”
― Ashly Lorenzana

Karma will help you on your journey to self-awakening by aiding you with a moral compass. The idea of karma makes you stop and think before you act. It makes you question your morality as you go through life and helps you to be a better person, regardless of your religion.

As Shakespeare wrote in his play King Lear “the wheel has come full circle”, so karma operates. This line represents the effects of karma, demonstrating that your good deeds will come back to you, while your misdeeds will cause suffering and misfortune.