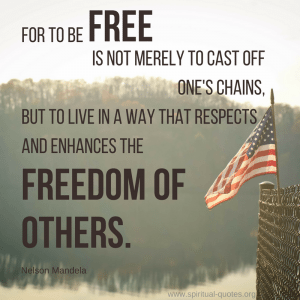 Even in the Twenty-First century, have yet to live in a world where freedom is universal. We cannot take our freedom for granted — rather it should be something we embrace wholeheartedly, in joyous celebration of our independence!

“We hold these truths to be self-evident: that all men are created equal; that they are endowed by their Creator with certain unalienable rights; that among these are life, liberty, and the pursuit of happiness.”
— Thomas Jefferson

“For to be free is not merely to cast off one’s chains, but to live in a way that respects and enhances the freedom of others.”
— Nelson Mandela

“The only way to deal with an unfree world is to become so absolutely free that your very existence is an act of rebellion.”
— Albert Camus

“The unity of freedom has never relied on uniformity of opinion.”
― John F. Kennedy

“Freedom is never more than one generation away from extinction. We didn’t pass it to our children in the bloodstream. It must be fought for, protected, and handed on for them to do the same.”
— Ronald Reagan

“I do not agree with what you have to say, but I’ll defend to the death your right to say it.”
— Voltaire

“I’d like to be remembered as a person who wanted to be free and wanted other people to be also free.”
— Rosa Parks

“If the freedom of speech is taken away then dumb and silent we may be led, like sheep to the slaughter.”
— George Washington

“Nothing is more difficult, and therefore more precious, than to be able to decide.”
— Napoleon Bonaparte

“Everything that is really great and inspiring is created by the individual who can labor in freedom.”
— Albert Einstein

“This, then, is the state of the union: free and restless, growing and full of hope. So it was in the beginning. So it shall always be, while God is willing, and we are strong enough to keep the faith.”
— Lyndon B. Johnson

“Humanity has won its battle. Liberty now has a country.”
— Marquis de Lafayette

“We hold our heads high, despite the price we have paid, because freedom is priceless.”
— Lech Walesa