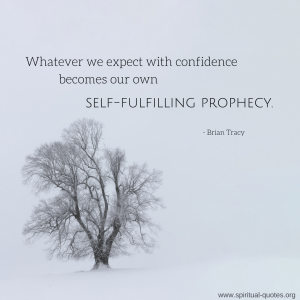 We all know that prophecy is a statement of what should happen in the future. It is the prediction of the future, addressed to individuals or groups of people. Who is the prophet? The people call them in different ways, such as fortune-tellers, soothsayers, or predictors. Often the prophets, really, foretold the future, immediate or distant, that prompted to understand by the word “prophet” a person capable of predicting.

When it all comes down, prophecy is not just a prediction of some events; it is knowledge that a prophet must tell the world. This is the main predestination of the prophet.

The most famous prophets are:

The 10 most famous quotes on Prophecy

“Whatever we expect with confidence becomes our own self-fulfilling prophecy.”
― Brian Tracy

“When you say something or sing something enough times, it becomes a self-fulfilling prophecy. It’s almost like casting spells. I don’t mean necessarily in the flighty, ‘I’m going to go buy a cloak with a hood now’ way. ”
― Feist

“Wrong will be right, when Aslan comes in sight,
At the sound of his roar, sorrows will be no more,
When he bares his teeth, winter meets its death,
And when he shakes his mane, we shall have spring again.”
― C.S. Lewis

“A writer is one who communicates ideas and emotions people want to communicate but aren’t quite sure how, or even if, they should communicate them.”
― Criss Jami

“I believed in Immaculate Conception and spontaneous combustion. I believed in aliens from outer space and vampires, prophecy, and the resurrection of the dead. I had deja vu many times each day. I was thirteen.”
― Kate Braverman

“Fear prophets and those prepared to die for the truth, for as a rule they make many others die with them, often before them, at times instead of them.”
― Umberto Eco

“Among all forms of mistake, prophecy is the most gratuitous.”
― George Eliot

Many of those who studied the prophecies pay attention to the fact that the gift of prophecy must not be confused with the prediction that can be conveyed by the prophet’s service either through his the word of the Spirit or the obligation to report on the future.

Some believe that prophesying and preaching are the same things. That all the inspired word is a prophecy, but the spiritual gift of prophecy shouldn’t be confused with preaching. From time to time sermons convey some elements of prophecy. This happens when a person has a connection with higher powers and words come out not from his mind, but rather from the Spirit. This is just one of the manifestations of the prophetic gift.

The true prophet is called to serve as a teacher or preacher and have at least two of the three gifts of revelation such as the word of wisdom, the word of knowledge and the discernment of spirits, and the gift of prophecy.