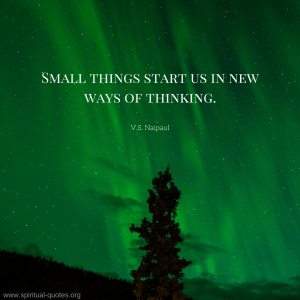 To have an epiphany means to have a sudden or striking realization of a concept or feeling. The idea of an epiphany generally relates to a manifestation in the fields of science, religion or philosophy. An epiphany comes at a time when you require enlightenment with regards to a problematic situation you may be experiencing.

Following an epiphany or realization will afford you the opportunity to view your situation from a new perspective that may also give you a deeper understanding of your life, your religion or even a philosophical concept that dominates your life.
You can relate epiphanies to innovation, in that when you are attempting to discover something new, the solution may very suddenly jump out at you. You may have heard the phrase “Eureka!” exclaimed when someone makes a discovery.

This comes from Archimedes’ epiphany when discovering how to measure the density of an object, while he was taking a bath. Another famous epiphany was that of Isaac Newton when he realized the same force that causes an apple to fall from the tree, keeps the Earth’s moon in orbit.

“Sometimes the dreams that come true are the dreams you never even knew you had.”
— Alice Sebold

“I never made one of my discoveries through the process of rational thinking.”
— Albert Einstein

“I’ve never known before what it feels like to want someone – not to want to hook up with them or whatever, but to want them, to want them. And now I do. So maybe I do believe in epiphanies.”
— John Green

“The thing about changing the world… Once you do it, the world’s all different.”
— Joss Whedon

“Gratitude bestows reverence, allowing us to encounter everyday epiphanies, those transcendent moments of awe that change forever how we experience life and the world.”
— John Milton

“People have moments of consciousness and epiphanies throughout their lives, but then suppress the realization.”
— Byrant Mc. H Gill

“Truth, by which the world is held together, has sprung from the earth, in order to be carried in a woman’s arms.”
— St Augustine

Your epiphany may come when you realize the divine power your deity has working within your life and in those around you, or it may come when you begin to understand your own spirituality as being separate from your religion.

It is important to remember that you cannot force an epiphany. You should rather open yourself up to a range of ideas and teach to discover where you truly see yourself along with your spiritual journey.