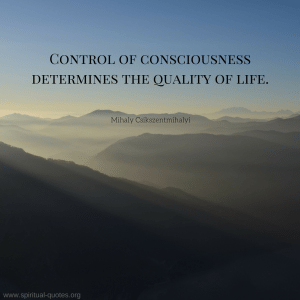 Arguably, the earliest evidence of human consciousness was found in ancient burial remains discovered in Qafzeh, Israel dating back 100 000 years. This signifies a point in human history at which we were able to acknowledge our own existence, our relationship to others and or own mortality.

In contemporary times the idea of a collective consciousness has come to light and describes the possibility that there exists a set of morals, beliefs, and ideals that act as a unifying force in society, for the benefit of the human race in general. Evidence of this can be seen in social phenomena such as solidarity, group-thought, and herd-mentality. Another idea is that it might be possible to tap into a universal consciousness that connects all life and all matter in the universe.

The Best Quotes on Consciousness

“Consciously be sensitive to others, and try to elevate their level of consciousness. Don’t do this by being preachy and telling them that they ‘should’ do this or that. Do it by raising your own level of energy and recognizing what’s best in others.”
― Srikumar Rao

“By subliminal, I mean things that occur in our world that are below the threshold of consciousness but do have a psychological effect on us.”
― Leonard Mlodinow

“There is no man, however wise, who has not at some period of his youth said things, or lived in a way the consciousness of which is so unpleasant to him in later life that he would gladly, if he could, expunge it from his memory.”
― Marcel Proust

“Acceptance looks like a passive state, but in reality it brings something entirely new into this world. That peace, a subtle energy vibration, is consciousness.”
― Eckhart Tolle

“There is no coming to consciousness without pain. People will do anything, no matter how absurd, in order to avoid facing their own Soul. One does not become enlightened by imagining figures of light, but by making the darkness conscious.”
― C.G. Jung

“But the true feminist deals out of a lesbian consciousness whether or not she ever sleeps with women.”
― Audre Lorde

“Control of consciousness determines the quality of life.”
― Mihaly Csikszentmihalyi

“Within each of us is a light, awake, encoded in the fibers of our existence. Divine ecstasy is the totality of this marvelous creation experienced in the hearts of humanity.”
― Tony Samara

The defining characteristic of consciousness is the perception, response, and experience of our everyday surroundings. With conscious thought comes the interrogation of our environments that stems from a plethora of different potential perceptions of the existence in which we find ourselves.

These perceptions are based on who we are and where we come from. It may be the essence of being human, it may be your soul, or it may be the thing that unites us all. Consciousness might also connect us with the entirety of the universe and give us a deeper understanding of it, the unfounded and ourselves.