Deprecated: Required parameter $length follows optional parameter $after in /home/spiritual-quotesorg-1039/public_html/prod/wp-content/themes/point/functions.php on line 468
 The Most Loved Quotes on Religion - Spiritual Quotes 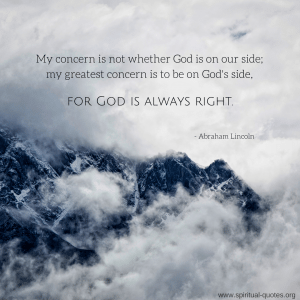 Humanity’s attempts at explaining the creation of everything we’ve come to know often revolve around mythical beings of boundless power, also known as gods. Believing in one or many gods is what makes one religious. Religion in itself, however, is far more than just that. It is a set of rules, rituals, and behaviors that one is supposed to implement into their lifestyle, which, when it comes to most religions, implies moral actions and good deeds. This means that those who truly believe will uphold a certain level of kindness and overall life discipline, depending on their exact religion.

Some of the most widespread examples, such as Christianity, Islam, Hinduism and Buddhism revolve around similar principles. Christianity and Islam are especially alike, due to the fact that they both worship single deities. They imply that discipline, honor, and devotion are the true paths to paradise, the supposed award of living a worthy life.

On the other hand, Hinduism and Norse paganism aim to bring gods closer to man by making them numerous and humanlike in their own ways. Both Brahma (Hinduism) and Odin (Norse paganism) have made mistakes as they were forming humanity, and that provides their followers with a sense of connection through the errors they themselves have committed.

The Best Quotes on Religion

“The Christian does not think God will love us because we are good, but that God will make us good because He loves us.”
— C.S. Lewis

“Prayer is not asking. It is a longing of the soul. It is daily admission of one’s weakness. It is better in prayer to have a heart without words than words without a heart.”
— Mahatma Gandhi

“My concern is not whether God is on our side; my greatest concern is to be on God’s side, for God is always right.”
— Abraham Lincoln

“Don’t speak to me about your religion; first show it to me in how you treat other people. Don’t tell me how much you love your God; show me in how much you love all His children. Don’t preach to me your passion for your faith; teach me through your compassion for your neighbours. In the end, I’m not as interested in what you have to tell or sell or preach or teach, as I am in how you choose to live and give.”
— Cory Booker

“When people try to use religion to address the natural world, science pushes back on it, and religion has to accommodate the results. Beliefs can be permanent, but beliefs can also be flexible. Personally, if I find out my belief is wrong, I change my mind. I think that’s a good way to live.”
— Lisa Randall

“A religion that gives nothing, costs nothing, and suffers nothing, is worth nothing.”
— Martin Luther

“If you have two religions in your land, the two will cut each other’s throats; but if you have thirty religions, they dwell in peace.”
— Voltaire

“We have just enough religion to make us hate, but not enough to make us love one another.”
— Jonathan Swift

“Every day, people are straying away from the church and going back to God.”
— Lenny Bruce

“Science without religion is lame; religion without science is blind.”
— Albert Einstein

Religion is something that should freely be practiced, regardless of the social influence. The universe is simply too vast and unexplored to give any of these original folk tales nearly enough credibility, but they do well at sustaining the mindset of the individual. There is a sense of fulfillment in every finished religious ritual that few other experiences can provide, which makes religion a unique emotional and spiritual journey. It can be regarded as a set of worldwide laws that contribute to the overall well-being of humanity at its current state.