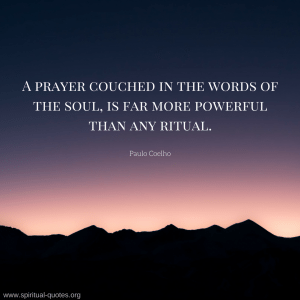 In spite of the supposed meaning of this nowadays misused term, a ritual is defined as the performance of any action behind a non-tangible goal. The progress of our society is constantly imposing new social rituals on those trying to keep up, while those with mental diseases are also prone to performing various stabilization rituals.

However, the most popular use of the term revolves around religious actions. Praying to a deity is the most basic example of a religious ritual, while there are much more complicated processes involved in the matter. In correlation to the above-said, a ritual involves any gesture required for a dose of spiritual (religious) fulfillment. From chanting Our Father before bed to bowing one’s forehead down to the floor in Mecca, religious rituals can involve one or millions of participants.

One thing that all rituals have in common is that, in one way or another, they contribute to the emotional and spiritual cleansing of the believer. Those who freely choose their religion are often most attracted to it by the rituals it involves, which makes them a vital component of every faith, if not even the most significant religious factor.

The Most Famous Quotes on Ritual

“When tea becomes ritual, it takes its place at the heart of our ability to see greatness in small things. Where is beauty to be found? In great things that, like everything else, are doomed to die, or in small things that aspire to nothing, yet know how to set a jewel of infinity in a single moment?”
– Muriel Barbery

“A prayer couched in the words of the soul, is far more powerful than any ritual.”
– Paulo Coelho

“Ritual is a spiritual psychodrama done for magical or religious purposes.”
– P.E.I. Bonewits

“The first stage of ritual is almost always the rise of the singer on his own song to a plane of power – a place of contact with the forces that move the universe. The words and sounds of a song are only the small visible aspect of a far greater mystery which lies beneath and beyond syntactical speech.”
– Jamake Highwater

“Ceremony and ritual spring from our heart of hearts: those who govern us know it well, for they would sooner deny us bread than dare alter the observance of tradition.”
– F. Gonzalez –Crussi

“We must learn which ceremonies may be breached occasionally at our convenience and which ones may never be if we are to live pleasantly with our fellow man.”
– Amy Vanderbilt

“Even the highest forms of sacrificial worship present much that is repulsive to modern ideas, and in particular it requires an effort to reconcile our imagination to the bloody ritual which is prominent in almost every religion which has a strong sense of sin.”
– William Robertson Smith

“These days too many of us seem inclined to cover our ears, close our eyes, and blindly follow the most narrow, conservative tenets of religion; or else seek comfort in the ancient traditions of New Age ritual.”
– Joan D. Vinge

“Don’t bother about being modern. Unfortunately it is the one thing that, whatever you do, you cannot avoid.”
– Salvador Dali

“We not only nurture our sacred relationships through ritual, but we are nurtured by them as well. In ritual, we move, and we are moved.”
– Alison Leigh Lilly

The Upholders of Belief

Rituals are there to reaffirm one’s devotion to their spiritual cause while offering consolation and relief simultaneously. Their undoubted importance in human progress and overall mental stability makes them a great friend to humanity as well as a free form of psychotherapy.

Then again, it’s important to note that the theater itself originated as a ritual of spiritual cleansing, which means that the largest entertainment industry to date owes its existence to the ritual concept. Nearly every religion known to man (apart from Satanism and the like) consists of these benign actions that can only do well to one’s mentality.