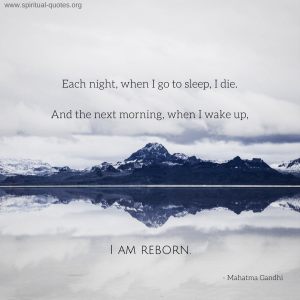 The belief that we will be reborn into another form after we die is an ancient concept that derives from eastern religions, such as Buddhism, Hinduism, Sikhism, and Jainism. Ancient Indian and Japanese texts often mention this religious phenomenon, including other great cultures that have produced various religions.

The myth entertains the idea of the immortality of the soul, claiming that we only travel through vessels without end. Once we are reborn, everything from our past life is erased from our memory, and our mind starts fresh. The decisions we make during a specific lifetime will determine what we morph into after we die.

From a psychological point of view, this is a less invasive technique of making the believer a better person throughout their lifetime. The notion of karma is also tightly bound to this aspect. Those who are good will be rewarded with a better life after their current one, and vice-versa. A good way to explain this belief to any commoner is with the following example. The universe is a gigantic soul highway, and your body is the vehicle you’re using to traverse it. Your soul will change many vessels on its endless quest throughout existence, so try to be a good driver.

The Best Quotes on Reincarnation

“We all have some experience of a feeling, that comes over us occasionally, of what we are saying and doing having been said and done before, in a remote time – of our having been surrounded, dim ages ago, by the same faces, objects, and circumstances.”
― Charles Dickens

“Each night, when I go to sleep, I die. And the next morning, when I wake up, I am reborn.”
― Mahatma Gandhi

“I recognized you instantly. All of our lives flashed through my mind in a split second. I felt a pull so strongly towards you that I almost couldn’t stop it.”
― J. Sterling

“For the first forty days a child
is given dreams of previous lives.
Journeys, winding paths,
a hundred small lessons
and then the past is erased.”
― Michael Ondaatje

“Doctrine of reincarnation is neither absurd nor useless. It is not more surprising to be born twice than once.”
― Voltaire

“As we live through thousands of dreams in out present life, so is our present life only one of many thousands of such lives which we enter from the other more real life… and then return after death. Our life is but one of the dreams of that more real life, and so it is endlessly, until the very last one, the very real life of God.”
― Count Leo Tolstoy

“All human beings go through a previous life… Who knows how many fleshly forms the heir of heaven occupies before he can be brought to understand the value of that silence and solitude whose starry plains are but the vestibule of spiritual worlds?”
― Honore Balzac

“The theory of Reincarnation, which originated in India, has been welcomed in other countries. Without a doubt, it is one of the most sensible and satisfying of all religions that mankind has conceived. This, like the others, comes from the best qualities of human nature, even if in this,as in the others, its adherents sometimes fail to carry out the principles in their lives.”
— Luther Burbank

“The soul comes from without into the human body, as into a temporary abode, and it goes out of it anew… it passes into other habitations, for the soul is immortal.”
― Ralph Waldo Emerson

Take Good Care of Your Soul

Even though you’re immortal (according to reincarnation), that doesn’t mean you should neglect your current life in the case where you’re dissatisfied with it. Remember that life is like music or an innocent child’s play. It’s not about the destination, but the journey itself. No matter who you aim to be, you’re supposed to immerse yourself in the beauty of existing on your way there. Otherwise, you will have wasted the majority of your life being a slave to your own aspirations. The idea of reincarnation is there to affirm this point of view.