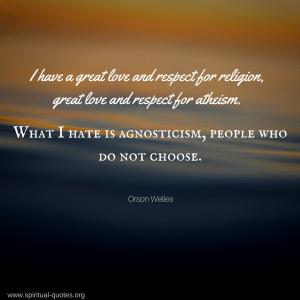 Dictionaries, academics, and authors often define atheism as a denial or a rejection of the idea of God or any other deity. This definition is essentially incorrect. Atheism is a rejection of the assertion that there are gods. This being said, some well-known religions, such as Buddhism and Taoism also lack the belief in the concept of a god or collection of gods and opt for a more inclusive explanation of human existence that connects us with nature and the universe.

Many classify atheism as a religion, but in truth, it is not. In most countries, including The United Sates of America, the same laws that protect religion, protect atheism. This does not mean that atheism is a religion; only that lack of belief is protected in the same way as religious beliefs would be protected.

Atheism relies on truth and scientific evidence. Statistics show that only 40% of scientists believe in a god, but most would say that they subscribe to a certain set of morals and ethics. Most human beings prescribe to this set of values. They are expressed in the way we conduct ourselves and is not determined by the limits of a religion. Atheism does not imply a lack of virtuousness, but simply the absence of belief and a trust in logical reasoning.

The most liked Quotes on Atheism

“Atheism is more than just the knowledge that gods do not exist, and that religion is either a mistake or a fraud. Atheism is an attitude, a frame of mind that looks at the world objectively, fearlessly, always trying to understand all things as a part of nature.”
― Emmett F. Fields

“Atheism is nothing more than the noises reasonable people make when in the presence of religious dogma.”
― Sam Harris

“There is no being eloquent for atheism. In that exhausted receiver the mind cannot use its wings, – the clearest proof that it is out of its element.”
― Augustus Hare

“Atheism has been on the rise for years now, and the Bible of the atheists is ‘The Origin of Species.'”
–Kirk Cameron

“Opposite to godliness is atheism in profession, and idolatry in practice. Atheism is so senseless and odious to mankind, that it never had many professors.
Atheism is so senseless. When I look at the solar system, I see the earth at the right distance from the sun to receive the proper amounts of heat and light. This did not happen by chance.”
― Isaac Newton

“But after he was pleased to reveal himself to me I did presently, like Abraham, run to Hagar. And after that he did let me see the atheism of my own heart, for which I begged of the Lord that it might not remain in my heart.”
― Anne Hutchinson

Atheism is lack of belief in higher power

Atheism is neither a belief system nor a religion. Atheism is not the denial or rejection of God, gods or other deities. Atheism is a lack of belief in a higher power, god, deity or spirit. Atheism declares that there is more to moral behavior than following outlined rules in the form of scripture or from a religious leader. It promotes skepticism and self-reliance. Atheism is about a search for truth, with concrete evidence. The key rule or directive to atheism is that all beliefs should be open to question.

‘’I contend that we are both atheists. I just believe in one fewer god than you do. When you understand why you dismiss all the other possible gods, you will understand why I dismiss you.’’ ― Stephen Roberts