Deprecated: Required parameter $length follows optional parameter $after in /home/spiritual-quotesorg-1039/public_html/prod/wp-content/themes/point/functions.php on line 468
 The Most Famous Quotes On Reality - Spiritual Quotes 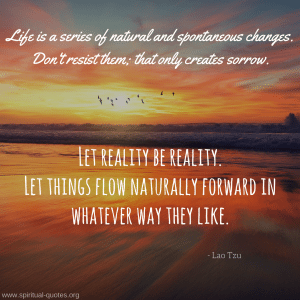 The normal existence of a person depends entirely on his perceptional ability. However, our field of vision is limited to the framework of our own consciousness. Thus, we cannot see the reality in the form in which it exists. Until recently, everyone believed that through perception we acquire objective information about the existing reality. The successes of physics, psychology and the rest of the science during the last century have revealed the conventionality of what has always been considered immutable. It aroused the question – what is our world perception.

Our sensors, as well as any measure devices, send information to the brain for the formation of a general picture about the changes that occurred in the measurer itself because of external influences.

Our worldview is dependent on:

With altruistic orientation happens just the opposite case. The more extensive the concept of “surrounding” for a person, the stronger is its positive impact on the world. Therefore, the discrepancy in the underlying understanding of the reality perception not only establishes the nature of the inner model of the universe, and actually alters the reality itself.

The most liked quotes on Reality

“Life is one big road with lots of signs. So when you riding through the ruts, don’t complicate your mind. Flee from hate, mischief and jealousy. Don’t bury your thoughts, put your vision to reality. Wake Up and Live!”
― Bob Marley

“Reality is merely an illusion, albeit a very persistent one.”
― Albert Einstein

“Reality is that which, when you stop believing in it, doesn’t go away.”
― Philip K. Dick, I Hope I Shall Arrive Soon

“Life is a series of natural and spontaneous changes. Don’t resist them; that only creates sorrow. Let reality be reality. Let things flow naturally forward in whatever way they like.”
― Lao Tzu

“Words can be twisted into any shape. Promises can be made to lull the heart and seduce the soul. In the final analysis, words mean nothing. They are labels we give things in an effort to wrap our puny little brains around their underlying natures, when ninety-nine percent of the time the totality of the reality is an entirely different beast. The wisest man is the silent one. Examine his actions. Judge him by them.”
― Karen Marie Moning

“If in preaching the gospel you substitute your knowledge of the way of salvation for confidence in the power of the gospel, you hinder people from getting to reality.”
― Oswald Chambers

“Reality has a way of intruding. Reality eventually intrudes on everything.”
― Joe Biden

“In dreams you don’t need to make any distinctions between things. Not at all. Boundaries don’t exist. So in dreams there are hardly ever collisions. Even if there are, they don’t hurt. Reality is different. Reality bites. Reality, reality.”
― Haruki Murakami, Sputnik Sweetheart

“It is far more difficult to murder a phantom than a reality.”
― Virginia Woolf

How real is Reality?

From the youngest and smallest persons, we all participate in the creation of fictions, fantasies, and myths, in the immediate activity of types that are forms of influence. To have a walk, to smoke a cigarette, to read a good book, to look at the beautiful pictures –these are the lovely illusions. Occasionally an illusion is formed deliberately. We become the directors of a “movie” or an event and create your own reality.