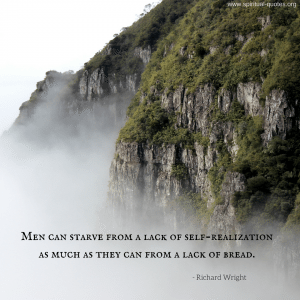 Paramahansa Yogananda defined self-realization as knowing, in all aspects that we are one with the omnipresence of God. It is a point of transcendence at which a person has a clear understanding of who and what they are, their relationship to others and their relationship to a higher power and the universe. Self-realization leads you to understand that we are separate neither from other individuals nor from a higher power. We are all interconnected and our main goal in life should be to continuously improve our understanding of this interconnectedness.

From a western perspective, self-realization generally contextualized within society. Maslow’s hierarchy, for example, places the concept of self-actualization at the pinnacle of being. The point at which all our basic needs and psychological needs have been fulfilled and we are able to achieve our full potential – ethically, morally and spiritually.

“Lots of things happen in our lives without any apparent justification. But whatever happens to us, takes us one step ahead in the path of self realization. The truth is we all are travelers in the life’s eternal journey, to meet for a short while, to care and share but we tend to forget that nothing lasts forever. If only we could cultivate a sense of detachment,  life would have been much easier.”
― Chitralekha Paul, Delayed Monsoon

“Your own Self-Realization is the greatest service you can render the world.”
― Ramana Maharshi

“A job should bring enough for a worker and family to live on, but after that, self-realization, the exercise of one’s gifts and talents, is what truly matters.”
― Michael Dirda

“Self-Realization Fellowship seemed like training. It was the training ground for finding a sense of peace in myself. Because that’s my job. It’s no one else’s.”
― Mariel Hemingway

“We believe with all the strength of our spirit that mankind has a supreme, primary and irreplaceable need which can be satisfied only through Jesus Christ, the first-born among men, the head of the new humanity, in whom each individual reaches full self-realization.”
― Pope Paul VI

“From exam grading to health education to professional training to democratic participation, paths towards self-realization and success in the world are often daunting and obscure: journeys only the privileged feel confident setting off along.”
― Tom Chatfield

“I used to think that divorce meant failure, but now I see it more as a step along the path of self-realization and growth.”
― Alana Stewart

“As long as we place millions of Indians at the centre of our thought process, as long as we think of their welfare, their future, their opportunities for self-realization we are on the right track.”
― Mukesh Ambani

Self-realization is a concept that has been investigated and debated the world over. It may be defined on the basis of what we can achieve in society given our own unique ethical, moral and spiritual make-up, or on a more inward-looking basis in which the self is continuously reflected upon in a critical manner in order to realize a state of interconnectedness with what we perceive to be God.

Regardless of how we choose to define self-realization, it is achieved at that moment when we have reached our full potential as human beings and are at peace with others, the universe and ourselves.