Deprecated: Required parameter $length follows optional parameter $after in /home/spiritual-quotesorg-1039/public_html/prod/wp-content/themes/point/functions.php on line 468
 The 10 Most Inspired Quotes on Revelation - Spiritual Quotes 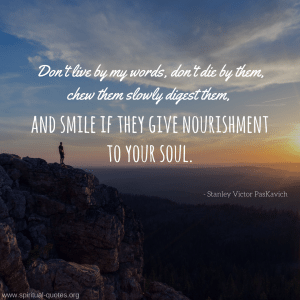 The recorded event of learning a supposed truth about the universe directly from a divine being is treated as a revelation in every religion. Almost every scripture that is viewed as holy by a community of believers can be called a revelation, as most of them are said to be comprised of alleged quotes of the gods they refer to.

The entire Bible can be considered a revelation since it was written according to the supposed words of Jesus Christ, God himself and the numerous angels. The same goes for the Qur’an, which is believed to be Muhammad’s transcription of Allah’s words.

It’s almost safe to say that there would be very few religion practitioners if not for the revelations that make up their literature. These tales and monologs serve to inspire the individual to believe and thus stay upon the righteous path. It is in these texts that humans are taught various things about the world by the numerous supreme beings that may or may not have created it.

Regardless of their credibility, the revelations offer numerous discipline and kindness inducing morals that both reinvigorate one’s faith in the supreme good and influence the individual into living with more spiritual quality.

The Best Quotes on Revelation

“It was strange, really. A couple months ago, I had thought I couldn’t live without him. Apparently I could.”
― Gabrielle Zevin

“There is an ancient tribal proverb I once heard in India. It says that before we can see properly we must first shed our tears to clear the way.”
― Libba Bray

“We pass through the present with our eyes blindfolded. We are permitted merely to sense and guess at what we are actually experiencing. Only later when the cloth is untied can we glance at the past and find out what we have experienced and what meaning it has.”
― Milan Kundera

“Don’t live by my words, don’t die by them, chew them slowly digest them, and smile if they give nourishment to your soul.”
― Stanley Victor PasKavich

“You don’t know me; you never knew my heart. No man knows my history. I cannot tell it: I shall never undertake it. I don’t blame anyone for not believing my history. If I had not experienced what I have, I would not have believed it myself. I never did harm any man since I was born in the world. My voice is always for peace.”
― Joseph Smith Jr.

“I realized that one cannot reveal oneself without mannerism, without some evident trace of one’s personality. But all the same one should not go too far in that direction…”
― Georges Braque

“One begins to realize that art… in setting out to express nature with ever growing accuracy, teaches us to look, to perceive, to feel. The stone itself becomes an organic substance, and one can feel it being transformed as one moment in its life succeeds another.”
― Georges Clemenceau

“A writer doesn’t solve problems. He allows them to emerge.”
― Friedrich Dürrenmatt

“Man can know his world without falling back on revelation; he can live his life without feeling his utter dependence on supernatural powers.”
― Christopher Dawson

“I think fiction is a very serious thing, that while it is fiction, it is also a revelation of truth, or facts.”
― John McGahern

The Masons of Faith

Without the holy words that serve as pillars of religion, it’s questionable whether we would’ve had a history riddled with atheism instead. Even though religion is nowadays becoming less of a cause for self-improvement and behaving in an acceptable manner, our entire past was dependent on its influence.

Those that further studied revelations and wrote their own understandings of them can be considered the progenitors of philosophy, and thus the creators of education. Even if revelations don’t hold much material value in the contemporary world, they’ve undoubtedly made a significant contribution to the development of the human race.