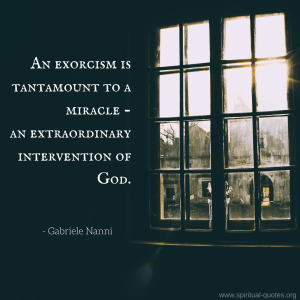 The term ‘exorcism’ refers to the eviction of a spiritual entity (typically ‘evil’ or ‘unclean’ in nature) from the body of a human being or a location that is has possessed. It may be practiced in a formal setting such as a Catholic exorcism performed by a priest with the approval of the Vatican or informally as a simple prayer.

Exorcisms are performed within a variety of religious settings such as Christianity, Islam, Judaism, and Hinduism. There are certain similarities between exorcisms performed within these religious paradigms such as the recital of Holy Scripture to invoke the undesired entity, the use of blessed objects like religious symbols and holy water and the compulsion of the entity to be dispelled from the body of the individual or locale, in the name of a particular deity.

In contemporary times exorcisms have been performed less frequently due to scientific advancements in the fields of psychology, psychiatry, and neurobiology which generally reduce the manifestation of ‘possession’ to symptoms of a variety of mental and neurological disorders such as psychosis, schizophrenia, multiple-personality disorder, sleep paralysis and epilepsy. These advancements have also resulted in the questioning of the phenomenon of possession and the validity of exorcisms.

The Most Liked Quotes on Exorcism

“I had a lot of time to think, and that is not good for your mind. And when it actually happened, it was not so much a celebration but the relief. It was an exorcism anxiety. After each race there is a procedure in which you get taken off to the podium and the TV interviews.”
― Damon Hill

“An exorcism is tantamount to a miracle – an extraordinary intervention of God.”
― Gabriele Nanni

“Possession and exorcism is something that’s in every religion and every culture. It’s a real primal fear: Is the body a vessel for our spirits? What happens if something else takes over it? Where does the spirit go?”
― Eli Roth

“Only after you’ve done the exorcism, then
you’ll understand that ghost’s also a species.”
― Toba Beta

“In the spirit realm, whatever is said becomes a reality, then, it can be same in the abode of the living, for powerful species, to say whatever they like for an immediate manifestation, it is the law in the astral planes, and we don’t care about the destination of the acting forces.”
― Michael Bassey Johnson

“Everyone knows that even the best exorcism has to be renewed once in a while.”
― Tahir Shah

“I think music should be scary. Music is an exorcism.”
― Florence Welch

“God never talks. But the devil keeps advertising, Father. The devil does a lot of commercials.”
― William Peter Blatty
Conclusion

The practice of exorcism has been used throughout recorded history and within the context of both western and eastern religions to rid people of evil entities that have the sole purpose of destroying your soul. Whilst exorcisms still take place on a regular basis it has been on the decline in recent history due to the expansion of our knowledge of the human brain and how it functions.

Whether or not possession is real the question arises: if it’s happening to you, does it really matter whether or not it can be explained scientifically?