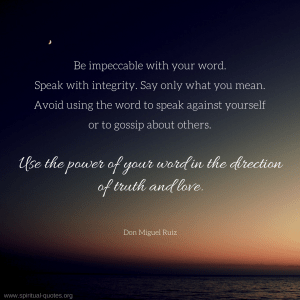 Integrity is defined as the ethical or moral values possessed by us. It means doing the right thing at the right time. Every individual has a personal choice to be truthful, honest and accurate in his or her actions and maintain trustworthy relations with other people.

If as a person you have integrity it means you would not do anything that dishonors or demeans yourself; it means you give respect to yourself. You should know that no one can force you to do anything. You are free to pursue things that you feel good about yourself.

We all know the difference between right and wrong and prefer to follow through. The ground rule is that every individual should do what is right without expecting anyone’s approval. Having integrity also means having the confidence to call out on others if they are wrong and not being ashamed for standing for the truth.

“The most important ingredient we put into any relationship is not what we say or what we do, but what we are. And if our words and our actions come from superficial human relations techniques (the Personality Ethic) rather than from our own inner core (the Character Ethic), others will sense that duplicity. We simply won’t be able to create and sustain the foundation necessary for effective interdependence.”
― Stephen Covey

“I am not an angel,’ I asserted; ‘and I will not be one till I die: I will be myself. Mr. Rochester, you must neither expect nor exact anything celestial of me – for you will not get it, any more than I shall get it of you: which I do not at all anticipate.”
― Charlotte Brontë, Jane Eyre

“The soul is dyed the color of its thoughts. Think only on those things that are in line with your principles and can bear the light of day. The content of your character is your choice. Day by day, what you choose, what you think, and what you do is who you become. Your integrity is your destiny … it is the light that guides your way.”
― Heraclitus

“Integrity is not a conditional word. It doesn’t blow in the wind or change with the weather. It is your inner image of yourself, and if you look in there and see a man who won’t cheat, then you know he never will.”

“The supreme quality for leadership is unquestionably integrity. Without it, no real success is possible, no matter whether it is on a section gang, a football field, in an army, or in an office.”
― Dwight D. Eisenhower

“Though negotiations are a rough game, you should never allow them to become a dirty game. Once you’ve agreed to a deal, don’t back out of it unless the other party fails to deliver as promised. Your handshake is your bond. As far as I’m concerned, a handshake is worth more than a signed contract. As an entrepreneur, a reputation for integrity is your most valuable commodity. If you try to put something over on someone, it will come back to haunt you.”
― Victor Kiam

“You can have information and ease of use and have artistic integrity at the same time. The art of being a good Web designer is getting yourself into that middle ground and treating it as a final destination instead of as a compromise.”
― Mike Davidson

“Be impeccable with your word. Speak with integrity. Say only what you mean. Avoid using the word to speak against yourself or to gossip about others. Use the power of your word in the direction of truth and love.”
― Don Miguel Ruiz

Integrity cannot be bought either can it be faked. You either have integrity or you don’t. If you want to be a great leader, a great person and a good friend it is important to have integrity which practically means being conscious and mindful of others. It means being honest and truthful at all times even when it is hard.

Integrity means not being corrupt, not talking behind people’s backs and not spreading rumors about others. An individual who has integrity will stand up for the oppressed and be a voice for the voiceless. They will tell you the truth to your face rather than talk about you to or with other people. They will not spread rumors but will confront those who are spreading rumors and even alert you when there is a bad rumor going on about you.