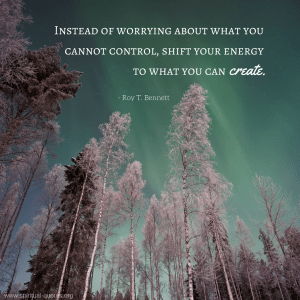 Westerners would be most familiar with the Judeo-Christian concept of creation, which states that God created the universe and all that resides within it, in a sequence of events that ultimately ended with His most perfect creation, humankind. According to the Hindu traditions, it is unclear whether the creation of the universe was spontaneous or whether it occurred at the command of God as only those who reside within the realm of gods could possibly understand the true origins of the universe.

Since the advent of scientific thought, evidence was brought to light that the universe originated from a single moment of expansion from matter in a state of high density and temperature. This expansion will continue until the end of time. Evolutionary biologists have taught us that life originated from a primordial matrix and evolved into single-celled organisms, and ultimately, into organisms like plants and mammals.

“The creation of something new is not accomplished by the intellect but by the play instinct acting from inner necessity. The creative mind plays with the objects it loves.”
― Carl Jung

“An original is a creation motivated by desire. Any reproduction of an originals motivated be necessity. It is marvelous that we are the only species that creates gratuitous forms. To create is divine, to reproduce is human.”
― Man Ray

“The most dangerous creation of any society is the man who has nothing to lose.”
― James A. Baldwin

“Instead of worrying about what you cannot control, shift your energy to what you can create.”
― Roy T. Bennett

“If your daily life seems poor, do not blame it; blame yourself, tell yourself that you are not poet enough to call forth its riches; for to the creator there is no poverty and no poor indifferent place.”
― Rainer Maria Rilke

“I would rather be what God chose to make me than the most glorious creature that I could think of; for to have been thought about, born in God’s thought, and then made by God, is the dearest, grandest and most precious thing in all thinking.”
― George MacDonald

“A tattoo is a true poetic creation, and is always more than meets the eye. As a tattoo is grounded on living skin, so its essence emotes poignancy unique to the mortal human condition.”
― V. Vale

“There is not one blade of grass; there is no color in this world that is not intended to make us rejoice.”
― John Calvin

“What can be more foolish than to think that all this rare fabric of heaven and earth could come by chance, when all the skill of art is not able to make an oyster!”
― Jeremy Taylor

“If created things are seen and handled as gifts of God and as mirrors of His glory, they need not be occasions of idolatry – if our delight in them is always also a delight in their Maker.”
― John Piper

Humans have been attempting to explain where we come from since the dawn of consciousness. It is in our nature to ask this question and always has been as evident in the numerous formulations of divine creation throughout history. With the expansion of the human mind, we have been able to gather scientific facts that prove (and disprove) our various hypotheses regarding this problem.

The question still remains: even if the entire origin and evolution of the universe and life can be explained through scientific fact, does that mean that it wasn’t triggered by something larger than ourselves? Perhaps the real question is: Who are we to say?