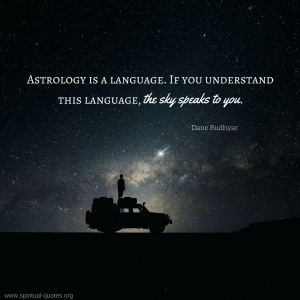 Astrology is used to awaken awareness within you. It can be used to truly understand and interpret traits of an individual. The word astrology originated from the Greek words astron meaning star and logos, which means word. By this translation, you can say that astrology is a symbolic language.

In astrology, it is believed that the same laws that guide the universe also guide humanity. All energy works the same and thus we are one with the universe. Today, astrology is recognized as a pseudoscience even though through most of history it was considered academic. Astrology can be explored back to the 2nd millennium BCE where it was used to forecast seasonal shifts. Many cultures throughout history believe that astronomical events can predict the future, but contemporary Western Astrology or Humanistic Astrology focus more on how celestial objects can influence an individual.

Looking further into astrology you recognize a pattern of twelve sectors. These sectors can be called the astrological alphabet or the Zodiac. It includes the signs, the planets, the houses and the house polarities. Other methodologies like the four elements and yin and yang also play a role when delving deeper into the topic. Astrology is more than just a science, it is a tool used to awaken self-awareness and to realize your gifts and inventive potential.

“Astrology is a language.  If you understand this language, the sky speaks to you.”
― Dane Rudhyar

“I know that astrology isn’t a science… Of course it isn’t.  It’s just an arbitrary set of rules like chess or tennis…. The rules just kind of got there.  They don’t make any kind of sense except in terms of themselves.  But when you start to exercise those rules, all sorts of processes start to happen and you start to find out all sorts of stuff about people.  In astrology the rules happen to be about stars and planets, but they could be about ducks and drakes for all the difference it would make.  It’s just a way of thinking about a problem which lets the shape of that problem begin to emerge.  The more rules, the tinier the rules, the more arbitrary they are, the better.  It’s like throwing a handful of fine graphite dust on a piece of paper to see where the hidden indentations are.  It lets you see the words that were written on the piece of paper above it that’s now been taken away and hidden.  The graphite’s not important.  It’s just the means of revealing their indentations.  So you see, astrology’s nothing to do with astronomy.  It’s just to do with people thinking about people.”
― Douglas Adams, Mostly Harmless

“Astrology can clear up or mix up a person as much as any other psychological, philosophical or religious mirror, a looking glass in the endless mirror hall of life.”
― Markku Siivola

“[H]is gaze wandered from the windows to the stars, as if he would have read in them something that was hidden from him.  Many of us would, if we could; but none of us so much as know our letters in the stars yet – or seem likely to do it in this state of existence – and few languages can be read until their alphabets are mastered.”
― Charles Dickens, Edwin Drood

“The stars which shone over Babylon and the stable in Bethlehem still shine as brightly over the Empire State Building and your front yard today….”
― Linda Goodman

“There is no better boat than a horoscope to help a man cross over the sea of life.”
― Varaha Mihira

“Before a war military science seems a real science, like astronomy; but after a war it seems more like astrology.”
― Rebecca West

“Astrology is one of the earliest attempts made by man to find the order hidden behind or within the confusing and apparent chaos that exists in the world.”
― Karen Hamaker-Zondag

“The celestial bodies are the cause of all that takes place in the sublunar world.”
― Thomas Aquinas

Simply put, astrology can be explained as the study of relative positions of celestial bodies within our Solar System relating to the date of birth of an individual. The analyses of these positions are connected to the signs of the Zodiac, also known as your star sign.

Even though it is considered a pseudoscience in contemporary times, it is still a great tool to explore self-knowledge. Astrology teaches us to not accept our problems as fate but to learn to overcome them by gaining awareness and to become conscious about the energies that govern our planet and ourselves.