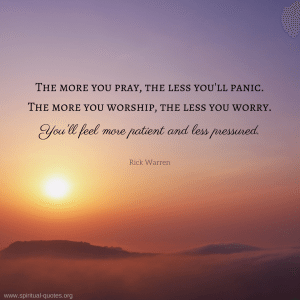 An act of worship is broadly characterized as one that demonstrates religious or spiritual devotion, often to a particular deity. It may take on a variety of forms ranging from silent meditation or a moment of prayer, through playing a musical instrument, to sacrificing your worldly possessions or even your body to show such devotion. It can take place within a group context where several individuals come together to collectively demonstrate devotion or on an individual basis.

Within a religious context worship often takes the form of ritual. A typical act of worship in the Buddhist traditions, for example, entails chanting whilst sitting barefoot on the floor facing an image of the Buddha with the soles of the feet pointing away from the image. The Judeo-Christian religions show devotion to their deity through prayer, praise through song, the recital of Scripture and the Holy Sacraments such as communion and christening.

In addition to demonstrating devotion to a deity (which is the main objective of worship), an act of worship is also meant to reinforce this devotion within you as well as in others. A common characteristic of worship is that it involves the acknowledgment that you have been given certain responsibilities and abilities in life to achieve the abovementioned objectives.

“But with Christ, we have access in a one-to-one relationship, for, as in the Old Testament, it was more one of worship and awe, a vertical relationship. The New Testament, on the other hand, we look across at a Jesus who looks familiar, horizontal. The combination is what makes the Cross.”
― Bono

“We sing inspirational songs, songs of praise and worship, and about how good and how big God is. We are magnifying the Lord.”
― Fred Hammond

“The Seven Social Sins are:
Wealth without work.
Pleasure without conscience.
Knowledge without character.
Commerce without morality.
Science without humanity.
Worship without sacrifice.
Politics without principle.”

“I can safely say, on the authority of all that is revealed in the Word of God, that any man or woman on this earth who is bored and turned off by worship is not ready for heaven.”
― A.W. Tozer

“I often see how you sob over what you destroy, how you want to stop and just worship; and you do stop, and then a moment later you are at it again with a knife, like a surgeon.”
― Anaïs Nin

“When every hope is gone, ‘when helpers fail and comforts flee,’ I find that help arrives somehow, from I know not where. Supplication, worship, prayer are no superstition; they are acts more real than the acts of eating, drinking, sitting or walking. It is no exaggeration to say that they alone are real, all else is unreal.”
― Mahatma Gandhi, The Story of My Experiments With Truth

“Man is the most insane species. He worships an invisible God and destroys a visible Nature. Unaware that this Nature he’s destroying is this God he’s worshiping.”
― Hubert Reeves

“When God’s people begin to praise and worship Him using the Biblical methods He gives, the Power of His presence comes among His people in an even greater measure.”
― Graham Truscott

“Many Spirit-filled authors have exhausted the thesaurus in order to describe God with the glory He deserves. His perfect holiness, by definition, assures us that our words can’t contain Him. Isn’t it a comfort to worship a God we cannot exaggerate?”
― Francis Chan, Crazy Love: Overwhelmed by a Relentless God

Worship is something that we do to show religious or spiritual devotion, reinforce what we believe in and why, and serve as an example to others of how we are supposed to live our lives from within a particular frame of reference.

This should make complete sense to those of us who are religious. From a more secular perspective, the first of these three objectives may be a bit difficult to reconcile with what we believe, however, if you truly believe in a certain way of life and you do what you do to the best of your abilities to inspire others to do the same, you’re worshiping.