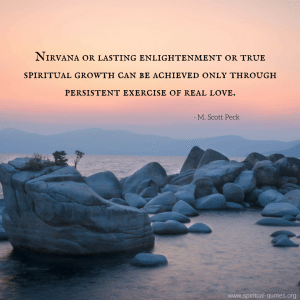 It is defined as a realization of non-self and emptiness to Buddhists and a state of perfect quietude, freedom, highest happiness according to Indian religions, Nirvana has become a very common word used in conversations today. To the common man, it means freedom from the shackles of reality, leading to happiness – a state of true happiness. This is why a lot of us work hard to achieve it. But how does one achieve a state of Nirvana? Is it really that difficult?

Do we need to endure much obstacles and suffering before experiencing it? Or could it be innately inside us already? Maybe we can achieve Nirvana or at least a form of it by seeking happiness within ourselves. Happiness is a choice and it may seem easy, but for much choosing happiness is actually quite a task. It is usually easier to give up when situations get difficult then focus on the negatives.

“Nirvana is not the blowing out of the candle. It is the extinguishing of the flame because day is come.”
― Rabindranath Tagore

“When Nirvana became popular, you could very easily slip and get lost during that storm. I fortunately had really heavy anchors – old friends, family.”
― Dave Grohl

“The search for Nirvana, like the search for Utopia or the end of history or the classless society, is ultimately a futile and dangerous one. It involves, if it does not necessitate, the sleep of reason. There is no escape from anxiety and struggle.”
― Christopher Hitchens

“Yes, there is a Nirvana; it is leading your sheep to a green pasture, and in putting your child to sleep, and in writing the last line of your poem.”
― Kahlil Gibran

“If my eyes could show my soul, everyone would cry when they saw me smile.”
― Kurt Gobain

“Nirvana is the utter extinction of all that is base in us all that is vicious in us. Nirvana is not like the black, dead peace of the grave, but the living peace, the living happiness of a soul which is conscious of itself and conscious of having found its own abode in the heart of the Eternal.”
― Mahatma Gandhi

“Nirvana or lasting enlightenment or true spiritual growth can be achieved only through persistent exercise of real love.”
― M. Scott Peck

When we are upset, it is usually much easier to find fault in others, in the situation and in ourselves, making us even more frustrated. What we forget is that there is another choice, and that is to choose happiness and find that silver lining. Maybe then we can achieve Nirvana or something like it.

Nirvana, by definition, is a state, and it could mean a state of happiness for us. Just like those who are actively searching for Nirvana, based on their faith and their beliefs, let us try and find our own Nirvana by changing the way we think and the way we look at things. We could actively try to look at the bright side of things and find the good in situations, no matter how difficult they may be. Let us always remember that in any situation, there is always a choice and though at times, fighting on and choosing happiness is the harder choice, it is there – all we have to do is choose it.