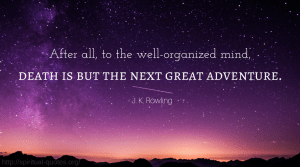 In times of unimaginable loss and heartache, find peace in these timeless truths.

Death is no more than passing from one room into another. But there’s a difference for me, you know. Because in that other room I shall be able to see.

The fear of death follows from the fear of life. A man who lives fully is prepared to die at any time.

I love those who can smile in trouble, who can gather strength from distress, and grow brave by reflection. ‘Tis the business of little minds to shrink, but they whose heart is firm, and whose conscience approves their conduct, will pursue their principles unto death.

Death must be so beautiful. To lie in the soft brown earth, with the grasses waving above one’s head, and listen to silence. To have no yesterday, and no tomorrow. To forget time, to forgive life, to be at peace.

Even today we raise our hand against our brother… We have perfected our weapons, our conscience has fallen asleep, and we have sharpened our ideas to justify ourselves as if it were normal we continue to sow destruction, pain, death. Violence and war lead only to death.

Just under the surface I shall be, all together at first, then separate and drift, through all the earth and perhaps in the end through a cliff into the sea, something of me. A ton of worms in an acre, that is a wonderful thought, a ton of worms, I believe it.

You only live twice:

Once when you are born

And once when you look death in the face

– Ian Fleming, You Only Live Twice

Is life so dear or peace so sweet as to be purchased at the price of chains and slavery? Forbid it, Almighty God! I know not what course others may take, but as for me, give me liberty, or give me death!

People fear death even more than pain. It’s strange that they fear death. Life hurts a lot more than death. At the point of death, the pain is over.

After all, to the well-organized mind, death is but the next great adventure.

The disembodied spirit is immortal; there is nothing of it that can grow old or die. But the embodied spirit sees death on the horizon as soon as its day dawns.

For death is no more than a turning of us over from time to eternity.

I’m not afraid of death because I don’t believe in it. It’s just getting out of one car and into another.

Perhaps the whole root of our trouble, the human trouble, is that we will sacrifice all the beauty of our lives, will imprison ourselves in totems, taboos, crosses, blood sacrifices, steeples, mosques, races, armies, flags, nations, in order to deny the fact of death, which is the only fact we have.