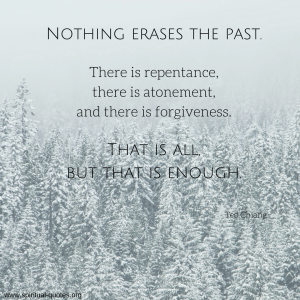 The action of retrospection relating to one’s past wrongdoings has been at play even before the first religion made its presence. Nowadays, it is a mostly religious term used to display one’s true devotion to themselves and their god. However, that doesn’t mean only religious individuals are prone to repentance. What truly signifies contrition is the irreversible change that was brought about by one’s reflection and realization of their mistakes. Religion is a welcome but unnecessary aid in achieving and practicing repentance. That who repents is bound to improve through suffering caused by the sudden gain of consciousness.

Religious individuals are often encouraged to visit their priest and ask for their god(s)’s forgiveness through the spiritual messenger. This action is known to improve one’s self-satisfaction during the time that comes after the mental process. Repentance is a valuable form of self-admittance and auto-therapy, which has long proved beneficial even in something as spiritually unrelated as science (psychology). Those unable to repent are often thought of as unaware and spiritually blind, doomed to their self-destruction. Humans have vices and they constantly make mistakes, so it is only natural to accept and rectify them from time to time.

The most famous quotes on Repentance

“No evil dooms us hopelessly except the evil we love, and desire to continue in, and make no effort to escape from.”
― George Eliot

“The heavens will not be filled with those who never made mistakes but with those who recognized that they were off course and who corrected their ways to get back in the light of gospel truth.”
― Dieter F. Uchtdorf

“Nothing erases the past. There is repentance, there is atonement, and there is forgiveness. That is all, but that is enough.”
― Ted Chiang

“A man does not have to feel less than human to realize his sin; oppositely, he has to realize that he gets no special vindication for his sin.”
― Criss Jami

“It’s Satan’s delight to tell me that once he’s got me, he will keep me. But at that moment I can go back to God. And I know that if I confess my sins, God is faithful and just to forgive me”
― Alan Redpath

“Repentance, not proper behavior or even holiness, is the doorway to grace. And the opposite of sin is grace, not virtue.”
― Philip Yancey

“When we have heartily repented of a wrong, we should let all the waves of forgetfulness roll over it, and go forward unburdened to meet the future.”
― Henry Ward Beecher

“Most people repent their sins by thanking God they ain’t so wicked as their neighbors.”
― Josh Billings

“What is past is past, there is a future left to all men, who have the virtue to repent and the energy to atone.”
― Edward Bulwer-Lytton

“People do not mind their faults being spread out before them, but they become impatient if called on to give them up.”
― Johann Wolfgang von Goethe

Improve Your Piety, or Simply Your Life

Be it religion, expanded consciousness or even social influence that causes one to repent, the benign outcome is invaluable to the individual’s emotional and spiritual progress. Those that fail to realize their own mistakes and correct them with future actions are stuck in a circle of repetition that eats their satisfaction away.

Receiving praise from a priest of your religion is confidence-boosting indeed, but the most important benefit of repentance is learning the lesson you taught yourself. This is what it truly means to repent – to be your own master and student.