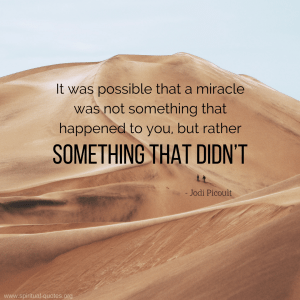 A miracle may be defined as an event that cannot be fully explained through natural or scientific laws. Such an event would typically be described as unlikely to occur and would widely be ascribed to a particular deity, saint, miracle worker or religious leader. Miracles may occur through the culmination of a certain series of natural events triggered by a higher power or by means of supernatural occurrences. God is, therefore, capable of working through nature to perform a miracle or directly intervening in an event of particular significance. Such an event would typically be described as supernatural.

The Catholic Church formally recognizes the occurrence of miracles.  A miracle commission is dedicated solely to the investigation of miracle claims from around the world. This commission fulfills a practical role in the church. It is done by investigating about miracle claims that ultimately inform important decisions. These decisions are such as whether or not a particular individual is declared a Saint but it also has a larger and much more significant purpose. It aims to strengthen peoples’ belief in God.

In a world where the mysteries of our existence is explained through science and natural laws more and more every day, people need to know that God still exists and is listening to our prayers.

“We don’t have to look far for miracles because they’re all around us. Everything is astonishing. The universe on it’s surface is alive with mystery.”
― Terence McKenna

“Rarely do we realize that we are in the midst of the extraordinary. Miracles occur all around us, signs from God show us the way, angels plead to be heard, but we pay little attention to them because we have been taught that we must follow certain formulas and rules if we want to find God. We do not realize that God is wherever we allow Him/Her to enter.”
― Paulo Coelho

“Miracles are a retelling in small letters of the very same story which is written across the whole world in letters too large for some of us to see.”
― C.S. Lewis

“I realized it for the first time in my life: there is nothing but mystery in the world, how it hides behind the fabric of our poor, browbeat days, shining brightly, and we don’t even know it.”
― Sue Monk Kidd

“Each moment of worry, anxiety or stress represents lack of faith in miracles, for they never cease.”
― T.F. Hodge

“Either you take in believing in miracles or you stand still like the hummingbird.”
― Henry Miller

“To witness miracles unfold in your experience, count your blessings and be thankful. Perceived small blessings accumulate to be the most powerful.

“What was wonderful about childhood is that anything in it was a wonder. It was not merely a world full of miracles; it was a miraculous world.”
― G.K. Chesterton

Are Miracles all Around Us?

The belief in the occurrence of miracles is essential to our belief in a higher power. It is the fingerprint of God that all of humankind yearns to see, in order to confirm our beliefs.

When we take into consideration what we have learnt from science, it may be argued that our very existence is a result of the culmination of a highly unlikely series of natural events.

It may mean that everything we see around us can be considered a miracle.